Wednesday 20th March saw the trip to the Naval Submarine Museum at Gosport, and on to Haslar Naval Cemetery.

A number of photos were taken by S/M Anna Shipley, and these can be found on this website under the Gallery March 2019 page.

Laying-Up of the Old Standard

The handover of the ensign took place at TS VANGUARD on Friday 14th December 2018 at the Sea Cadets Annual Awards evening.

The Branch was represented at the ceremony by Branch President - S/M Bob Scott, and Branch Chairman S/M David Shipley.

S/M Bob gave a brief explanation of the reason for requesting the Standard be laid-up, and S/M David requested the Commanding Officer of TS Vanguard - Sgt Barry Homewood - to accept the Standard for safe keeping.

TS Vanguard also provided a guard and escort for the Standard party.

Also in attendance at the ceremony was TS Vanguard Chairman, S/M Paul Minter, the High Sheriff of West Sussex - Mrs Caroline Nicholls - and the Mayor of Worthing - Cllr Paul Baker.

The Commanding Officer duly accepted the old standard for safe keeping, and it now remains laid-up at TS Vanguard, alongside the retired Branch Standard from the Lancing RNA Branch. 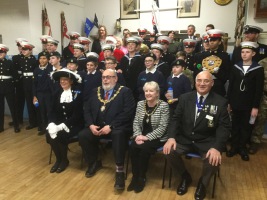 Just Before Christmas, the Branch held a training session at the Broadwater Working Mens Club for those with Ipads wishing to progress their knowledge and skills.

The event, arranged by S/M Anna Shipley, was well attended and well received - but then again it may have had something to do with the provision of Wine and Mince Pies!

All too often we hear of the effect that being socially isolated has on elderly veterans. When they are not connected to the online world, they also tend to be worse off financially.

The RNA’s Project Semaphore has distributed hundreds of iPads to veterans preloaded with useful apps and familiarisation training.

In enabling veterans to do the things most of us find second nature (for instance, Skyping family and friends, internet banking and shopping, accessing support information, social media and entertainment), we can help them connect with friends and regain some of their independence. 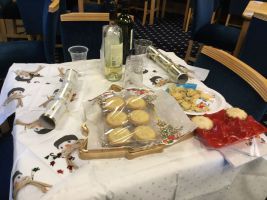 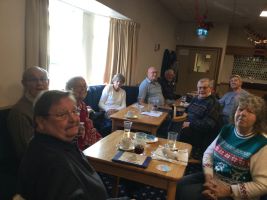